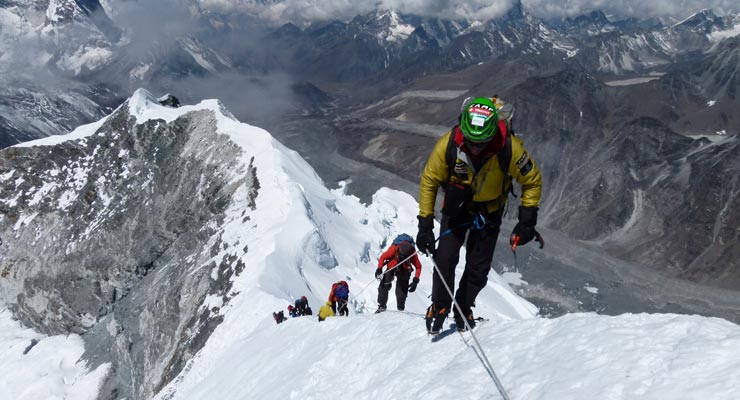 With eight of the world’s highest mountains in the country, Nepal is a mountaineer’s paradise. The ultimate glory of  mountaineering is reaching the summit of Mt. Everest, but there are other technical challenges like Lhose beside it or you can take on any of the other 326 climbing peaks that are waiting for you!

The Nepal Himalaya is the most formidable mountain range in the world with nearly a third of the country lying above the elevation of  3,500 m. Eight of the world’s  highest peaks lie within Nepal’s territory: Everest, Kanchenjunga, Lhotse, Makalu, Cho Oyu, Dhaulagiri, Manaslu and Annapurna,which are all over 8,000 m above sea level. The first to be climbed among them was Annapurna in 1950 by a French Expedition with Maurice Herzog as leader while Everest was first summitted by Edmund Hillary and Tenzing Norgay in 1953 with a Bristish Expedition led by John Hunt.

Besides these eight giant peaks, there are 326 other mountains within Nepal which are open for mountaineering expeditions and out of them, 103 have never been climbed before. Nepal offers mountaineers more opportunities than any other country in the world, and throws endless challenges at them including the less glorified trekking peaks which still require climbing gear and climbing skills if you want to climb them.