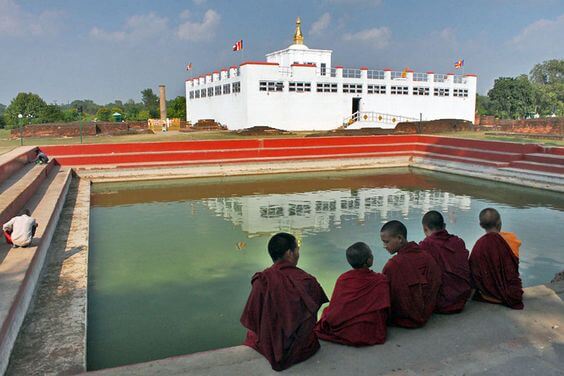 Lumbini is 4.8 km (3 mi) in length and 1.6 km (1.0 mi) in width. The holy site of Lumbini is bordered by a large monastic zone in which only monasteries can be built, no shops, hotels or restaurants. It is separated into an eastern and western monastic zone, the eastern having the Theravadin monasteries, the western having Mahayana and Vajrayana monasteries. There is a long water filled canal separating the western and eastern zones, with a series of brick arch bridges joining the two sides along the length. The canal is serviced by simple outboard motor boats at the north end which provides tours.The holy site of Lumbini has ruins of ancient monasteries, a sacred Bodhi tree, an ancient bathing pond, the Ashokan pillar and the Mayadevi Temple, where the supposed place of birth of Buddha is located. From early morning to early evening, pilgrims from various countries perform chanting and meditation at the site.

.It is the place where, according to Buddhist tradition, Queen Mahamayadevi gave birth to Siddhartha Gautama in 563 BCE. Gautama, who achieved enlightenment some time around 528 BCE, became the Buddha and founded Buddhism. Lumbini is one of many magnets for pilgrimage that sprang up in places pivotal to the life of the Buddha.

Kapilvastu, is one of the districts of Province No. 5, Nepal. The district, with Kapilvastu municipality as its district headquarters, covers an area of 1,738 square kilometres (671 sq mi). Kapilvastu is the ancient sakya capital city where Prince Siddhartha spent 29 years of his early life before his great renunciation.

Ramagrama stupa  is a stupa located in Ramgram Municipality, in the Nawalparasi District of Nepal. This Buddhist pilgrimage site, which was constructed some 2500 years ago, contains relics of Gautama Buddha.This is the single stupa survived untouched that enshrines one of the eight shares of the Asthaghatu.

Devdaha is a municipality in Rupandehi District of Nepal, the ancient capital of Koliya Kingdom, located 57 km east of Lumbini and east of Butwal and shares a border with Nawalparasi district on the east side. It is identified as the maternal home of Queen Mayadevi, Prajapati Gautami and Princess Yasodhara. There are many places to visit in Devdaha. It is believed that Prince Siddhartha had spent some years of his childhood with his step-mother/aunt Prajapati Gautami in Devdaha. Devdaha was a township of the koliyan in what is now the Rupandehi District of Nepal. The Buddha stayed there during his tours and preached to the monks on various topics. According to the Commentaries, it was the city of birth of the Buddha’s mother (Mayadevi), and of Pajāpatī Gotamī and their companions (Koliyans), who married the Sākiyans of Kapilvastu

BodhGaya is a religious site and place of pilgrimage associated with the Mahabodhi Temple Complex in Gaya district in the Indianstate of Bihar. It is famous as it is the place where Gautama Buddha is said to have obtained Enlightenment (Pali: bodhi) under what became known as the Bodhi Tree.Since antiquity, Bodh Gaya has remained the object of pilgrimage and veneration for both Hindus and Buddhists.

For Buddhists, Bodh Gaya is the most important of the main four pilgrimage sites related to the life of Gautama Buddha.

Vaishali or Vesali was a city in present-day Bihar, India, and is now an archaeological site. It is a part of the Tirhut Division.

It was the capital city of the Vajjian Confederacy of Mithila (Vrijji mahajanapada), considered one of the first examples of a republic around the 6th century BCE. Gautama Buddha preached his last sermon before his death in c. 483 BCE, then in 383 BCE the Second Buddhist council was convened here by King Kalasoka, making it an important place in both Jain and Buddhist religions. It contains one of the best-preserved of the Pillars of Ashoka, topped by a single Asiatic lion.

At the time of the Buddha, Vaiśālī, which he visited on many occasions, was a very large city, rich and prosperous, crowded with people and with abundant food.

Kushinagar is a pilgrimage town in the Kushinagar district of the Indian state of Uttar Pradesh. The name of “Kasia Bazaar” was changed to Kushinagar and then Kasia Bazaar became a municipality with the official name Kushinagar.

It is an important Buddhist pilgrimage site, where Buddhists believe Gautama Buddha attained Parinirvana after his death. It is an international Buddhist pilgrimage centre. The followers of Buddhism, especially from Asian countries, wish to visit this place at least once in their lifetime

Rajgir (originally known as Girivraj) is a city and a notified area in Nalanda district in the Indian state of Bihar. Rajgir, meaning the abode of Kings, has been mentioned fist in the ancient Hindu epic Mahabharata as the capital of Magadh, ruled by the mighty King Jarasandha. Although the exact time of the origin of this city has not been established, it is estimated by scholars that it must be around 3,000 years old.

Rajgir has been mentioned in ancient Buddhist and Jain scriptures and also in the travelogues of Buddhist travellers Huen Tsang and Fa Hian who visited India during the Mauryan and Gupta times. The city is divided in two parts, the old fortified city which lies in the valley surrounded by seven hills (Chhatha, Ratna, Saila, Sona, Udaya, Vaibhara and Vipula) and the new city established by Ajatshatru, the son of Bimbisara and a contemporary of Lord Buddha.

Nalanda was a great center of Buddhist learning in ancient times. A large number of Buddhist students thronged the nalanda university to study Buddhism. According to the Chinese traveler Hieun Tsang, the place owed its name to a naga, who resided in a local tank. Lord Vardharmana Mahavir and Lord Buddha visited Nalanda quite frequently in the 6th century BC.

The Bouddha attanined enlightenment in Bodhgaya he came to sarnath. Here in the deerpark, he delivered his first sermon, or in religious language, set in motion the wheel of law (maha-Dharmachakra Pravartan). On the day before his death Buddha included sarnath along with Lumbini, Bodh Gaya and Kushinagar as the four places he thought to be sacred to his followers.